Ron  got a notice of non delivery from the mail department at his prison. They did not tell him what the mail was or from whom except to name the document number. They destroyed the mail :no due process- . This needs to be pursued. Even a littel dent here in this case would make a big differnce.

Mail tampering is  happening throughout the system and there is no accountability. We have evidence that some prisons are  just "disappearing" the mail they do not like and it is becoming frequent that only through a third party do we learn that mail was sent at all.In two prisons our newsletter was not delivered to prisoners until two months after delivery to the prison- no notice , no explanation, and only after repeated complaints was it delivered at all.

Here is Ron's complaint to the prison:
complaint on PDF 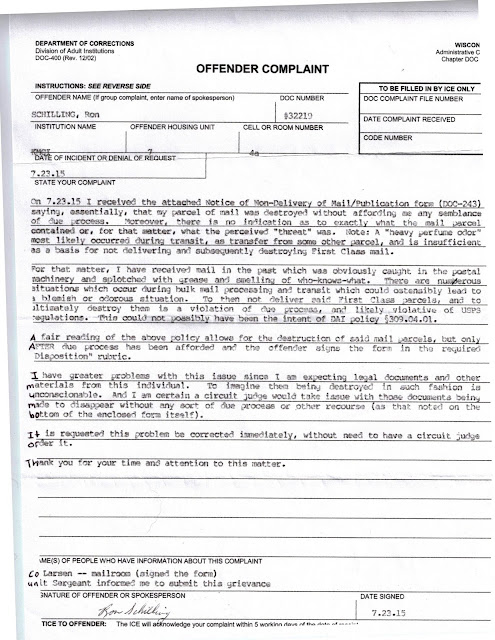 
Before you read this transcript , we should review a little of Ron's Schilling's history- he was eligible for parole after 13 and a half years and has been in prison for 40 years.   He has been to medium and minimum back and forth many times, has had jobs "outside the fence" and was granted parole by parole chairman   Lenard Wells about 10 years ago only to have it whisked away . Wells  was fired in a whipped up hysteria about releasing "murderers." We were not ready to give up our revenge only strategy. Are we ready now?
Here is Ron's comment on the hearings (from a letter )

This afternoon I was called to the parole commission again. What a farce. I tried to keep things rooted in reality, positive and factual, but the guy merely want to be pretentious right off the bat, saying he was "disappointed" to see me still here. I pointed out the pretext, him saying I should be at Minimum, yet his D-12 precludes consideration of that. Moreover, how he pretends the 5 and 4 year defers never happened, Eeeringa working on the parole commission, all the family members and friends and friends of friends working throughout the system at virtually every joint and every Minimum, and how they sent me back to Medium six times -- it's all in my head. Seriously, that's what he said. I loaded the recording well, and it shou1d make an interesting transcript. Oh, and then he gave me yet another D-12. And he said it would not affect the PRC decision. Surprise-surprise

DD: Mr. Schilling, is there anything else.
RS: Yeah, I was walking on eggshells the whole time, obeying all the rules, being polite and courteous to everybody and helping out every chance I had, and I got jiggied anyway. Six times. And now you want me to do it a seventh time, thinking that, oh, maybe I'll be able to stay. Really?
I don't know what we're going to do with this. We're at an impasse, here. They're not going to let me stay at Minimum. Don't you see that?
DD: I don't see that.
RS: Really.
DD: I think that's the distortion that you hold that's holding you back. RS: It's all in my head, of course. It's convenient for you to say that. So what about this new Chairperson? We have a new Chair, huh?
DD: Yes, we do.
RS: Do you know anything about him?
DD: Our meeting here today is not to discuss what I know or might know or what I don't know about anybody.
RS: I'm going to have somebody Google him, anyway.
DD: Okay.
RS: Yeah, he was the classification specialist at Oakhill, and I was digging through my files last night and found a letter to Stensberg dated back in 106. So as soon as I heard his name I knew he had popped up somewhere in my past.
The COMPAS evaluation, what do you think about that? There's been a new training day that recently popped up and all DOC employees can now access this COMPAS thing and stick any kind of information in there that they want - and it's all secretive. We never get to find out what was said or who said it.
DD: I'll note for the record that a COMPAS evaluation was completed and you scored "low" in terms of violence and "low" in terms of general recidivism. So it doesn't appear that somebody sneaking something in to make it look high-risk.
RS: Not yet.
DD: Okay.
RS: Watch.
DD: Alright.
RS: I mean, I would have no way of knowing that - that's my point, is that it's all secretive and I would have no way of verifying the truth or validity of anything that goes on with the COMPAS.
DD: Again, it sounds to me like a paranoid distortion.
RS: This is something that the system is doing, allowing any DOC employee - and there are a lot of them who are victim's family members and friends and friends of friends.
DD: Any entries that are made into the COMPAS program leaves a footprint by the person that's there.
RS: And I heard there's going to be an auditor, but I'm not sure bow efficient that will be. I guess that remains to be seen.
DD: Is there anything else?
RS: I wish you'd go through the record and find - find out the truth. I wish that you cared about the truth. I don't know what else to say, I really don't.
DD: Having not heard anything from you in terms of interest in transition, I'm going to set this for another 12-months. Again, the admonition is you'll have excellent conduct moving forward —no major or minor conduct reports. And I still encourage you to consider the reduction through reduced security and to have that conversation with PRC. There's nothing about my deferral that prohibits you from transitioning.
RS: Maybe you could tell them that.
DD: I'll include it in my action.
RS: Really. We'll see what that does.
It was nice seeing you.
DD: Yup.
RS: I seethe fog's finally clearing here. That is an excellent little recorder. God, I wish they'd let us have those. Okay. Have a nice day, and we'll see you next year.
DD: Alright, good luck to you.

Ron the singer and song writer

Posts on this blog

FFUP
FFUP is a prisoner support group, non profit, dedicated to the concept that we are all brothers and sisters and once we lock a person up, we are responsible for his or her treatment. In these blogs and webs we seek to counteract the hysteria about criminals and discuss the root causes of crime while presenting the human face of prisons. / Our main blog is www.prisonforum.org / FFUP works as advocate for prisoners and their families, has special concern and projects on segregation issues and is committed to the release of ready to be parole old law prisoners. / EMAIL US :pgswan3@aol.com